Nordic Fest Skäl Recipient (previously flag recipient) is an individual or individuals who have demonstrated exceptional and continuing support of the Fest. 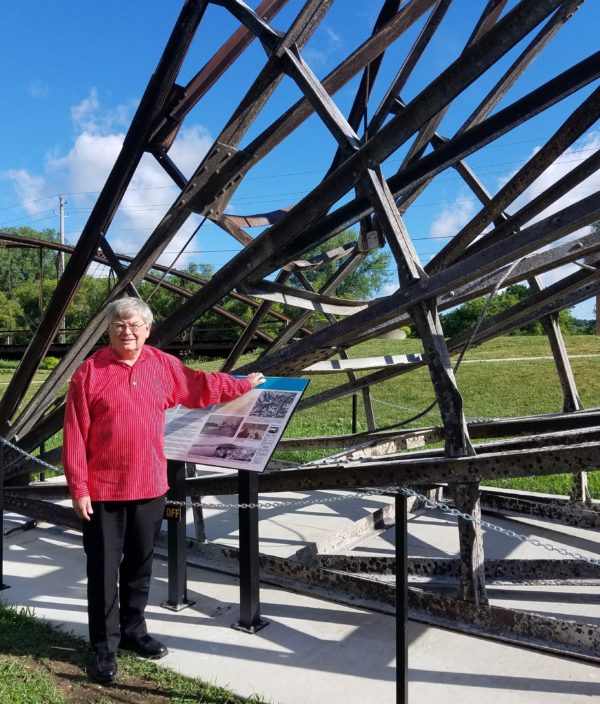 Steve Johnson’s first Nordic Fest was in 1973. He has been part of most of them since then over his decades-long career at Vesterheim, the National Norwegian-American Museum and Folk Art School. When you work at Vesterheim, participation in Nordic Fest is a given.

As Vesterheim’s liaison to the Nordic Fest Board, Steve served starting in 2000, and was elected Board President in 2006. During this time, he worked primarily with membership, encouraging multiple reminders for the broadest possible community support of the event. Some of the regular features of Nordic Fest that everyone has come to expect, such as Heritage Demonstrators and Viking reenactors, are also the result of Steve’s tireless efforts.

Steve Johnson stands as one of the many people who have helped over many decadesto sustain this great community event. His respect for historical and cultural heritage provides a fine example for everyone who will carry the Nordic Fest tradition into the future!

Nordic Fest Grand Marshal is an individual or individuals who have provided outstanding services to the Community.

Nordic Fest chooses the Grand Marshal to recognize outstanding service to the community. Hometown Taxi was nominated for this honor by some of their many grateful customers! This unique small business provides a service that allows for a quality of life that could not be imagined in most small towns or even larger cities. For those who don’t drive for whatever reason, Hometown Taxi is there to help. Most of the clientele consists of regular passengers, and more than 60% are senior citizens.

Hometown Taxi caught the eye of the Wall Street Journal a while ago. A 1999 article noted aspects of their business model, and could not miss the significant ways that it differs from most. From the start in 1987, it has been run as a partnership of driver-owners. There are currently eight: Daniel Rotto, Scot Idstrom, Eric Paulson, Ketel Paulsen, Craig Witt, Heidi Olstad, Eric “Lincoln” VanVliet, and Ian Miller. Together, the website announces, they have “well over 100 years of taxi driving experience.” Turning a profit is secondary to providing a service to members of the community. “We love our riders,” says Daniel Rotto, who has been part of it from the start.

The Nordic Fest Board acknowledges the dedication and sacrifice of essential workers during the past year of COVID disruption, and counts Hometown Taxi among them. During the worst of it, business was down to just 5% of normal. Those were “tough times,” but they never shut down. With limited hours starting in March 2020, Hometown Taxi offered delivery service and essential medical rides. An example is driving dialysis patients three times a week for treatment. Ridership is back to about 80% of normal. The drivers are unanimous in their eagerness to get beyond COVID, but for now they are keeping plastic barriers and air handling devices installed in the taxis. They are also holding off on shared rides, a charming part of normal operations that saves time and gas, and is a key part of building community that Hometown Taxi does so well. The safety and health of the riders is most important.

Thank you Hometown Taxi for your service to the Decorah community since 1987. Your courtesy, friendliness and helpfulness are inspiring!

The Nordic Fest Board is excited to announce that Nordic Fest 2021 will be held this summer, July 22-24.

This year’s theme is Skål Nordic Fest: The Festival with Heart. After reviewing the projections for the pandemic and Nordic Fest’s economic impact on the area, the Nordic Fest Board voted to move forward with this summer’s Fest plans. The Board will work with a variety of local partners to collaborate on best practices and safety protocols to have in place for volunteers and visitors alike. All involved continue to look ahead with optimism and creativity to make Nordic Fest 2021 a great and safe community celebration.

This summer will celebrate Nordic Fest’s 54 th year. We hope you will join as we toast (skål) our community, the visitors who travel to join us and the Fest tradition that allows us to celebrate together. Nordic Fest is made possible thanks to the generous support of members and sponsors, as well as the hard work of numerous volunteers, organizations, entertainers, and businesses. It truly is a festival that showcases the heart of our community, as well as the greater Driftless region.